On January 1st, millions of consumers resolve that they’ll turn a new leaf, kick their sugary vices, and return to the gym. According to Statistic Brain Research Institute, nearly 60 percent of Americans also claim to keep good on their resolutions, at least through the first month. But, xAd’s foot traffic data reveals that consumer effort in keeping those resolutions declines after the third week in both the US and UK. Consumers, it seems, are a little less than truthful about maintaining their resolutions.

This is just one of the many findings from xAd’s foot traffic analysis of consumers habits around resolutions. While insightful, it presents a bigger question to marketers: “Do people actually do what they say they’re going to do?” Foot traffic data can help us gain a deeper understanding into this question; revealing that sometimes the answer is simply, no.

Below are three additional insights gleaned from xAd’s foot traffic data, exposing new secrets around consumers and their habits: 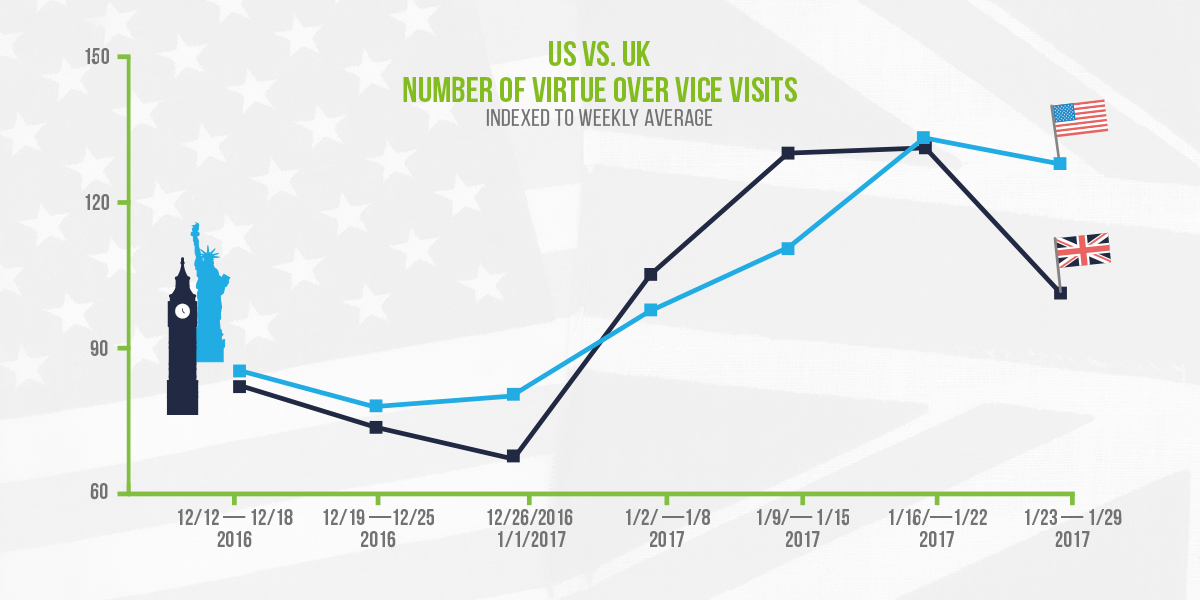 US consumers stay on target with their resolutions at least a week longer than UK consumers. But by the second week of January, UK consumers give into QSRs more so than their US counterparts and start to drop off from virtuous actions, like eating healthy and going to the gym.

US consumers are also 34 percent more driven than average to make virtuous changes within their lives during the third week of January, however, their behavior shifts shortly after that. By the last week in January, US enthusiasm for a healthier lifestyle begins to drop off by nearly 5 percent of visits to health-centric stores versus visits to fast food and liquor stores — just in time for the end of “Dry January” and the lead up to Super Bowl. By February 6, resolutions dropped an additional 8 percent.

There’s Something About the Northeast If a consumer lives in the Northeastern part of the US, they’re much more hardcore about sticking to their goals. In a study about centenarians from the Boston University School of Medicine, the Northeastern states have the highest number of US citizens living over 100 years. None of the centenarians or super-centenarians (110 or more years old) were obese, or had a habit of smoking. What’s more is that these centenarians were wide-ranging in socioeconomic status, ethnicity, and diet—though very few were eating hamburgers regularly or drinking alcoholic or sugary beverages.

The Midwest and the South Have Similar Habits 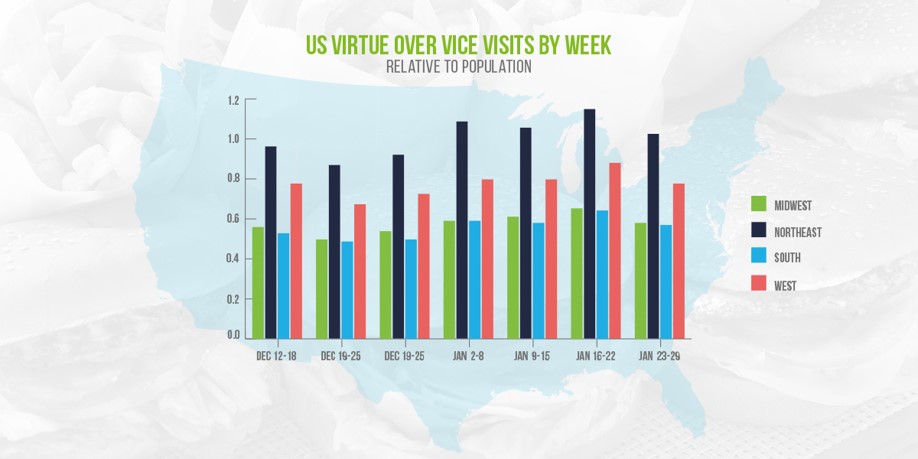 Consumers in the middle of the country and southern states have similar lifestyles, according to their foot traffic patterns. In nearly every week from mid-December to the end of January, consumers in the Midwest and South had roughly the same ratio of virtues to vices from week to week, within a few degrees. By contrast, the Northeast and the West, which were both healthier than the Midwest and Southern states, had a much larger differences between them.

So, what does this mean for marketers?

By the third week of January, it’s time for gyms or health food stores to start re-incentivizing consumers to keep making healthy choices by offering new perks and/or sending positive campaign messages to keep up the spirit. The same can be said for QSR or retail marketers of liquor stores and supermarkets, who might be able to win people back consumers during this same time frame. Marketers should also be aware of region-specific habits and vices—it’s likely that the same marketing in the Midwestern states won’t appeal to the Northeast.